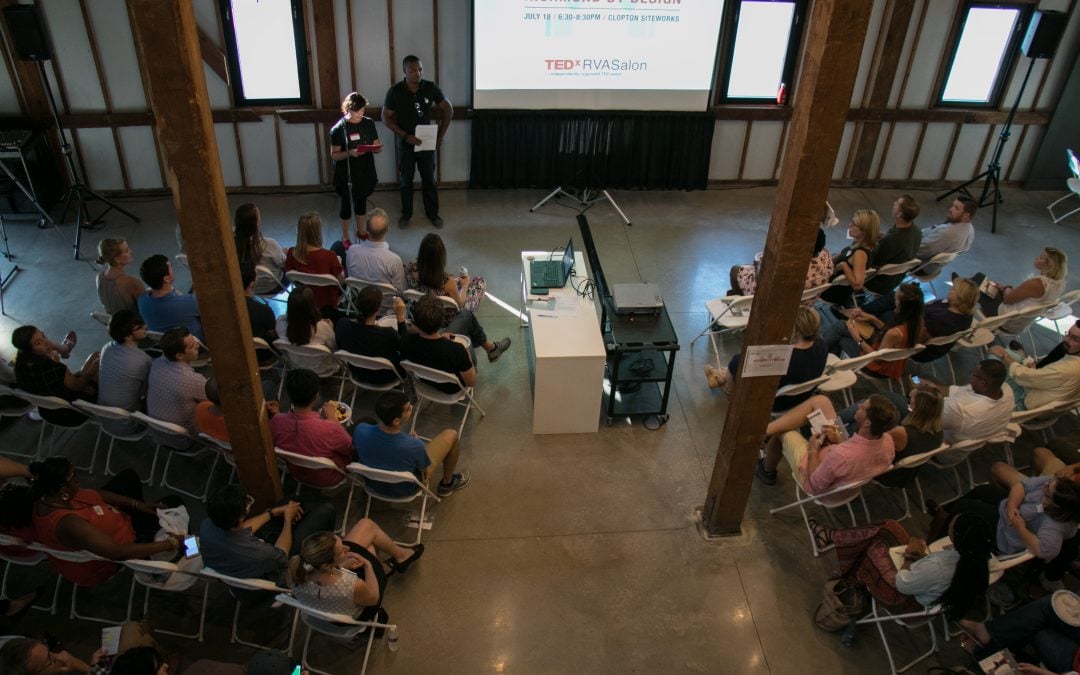 For this month’s Salon, we gathered at Clopton Siteworks in a freshly refurbished commercial use warehouse space that’s so gorgeous I think I may have literally used “oooh” and “aaah” to describe it. It was a fitting venue for our topic, Richmond by Design, as we spent the evening exploring Urban Planning and how it plays not only into the RVA we see today but the one we will see tomorrow.

It’s also good timing– the big launch for Mayor Stoney’s Richmond 300 master plan happened to be scheduled for the same day. I do love a good setup from the city! (Which, PS, did you guys know that Richmond will officially be 300 years old in the year 2037, and that’s only 20 years from now? Do we have to party like it’s 1737 when the time comes?)

We screened three talks this go-around:

During the conversation about parks and open space, someone mentioned the need for parklets in the city. Did you know that parklets are totally allowed by the City? Find out about the Parklet Program so you can get one in your ‘hood. Other ideas that surfaced through conversation were pedestrian plazas where cyclists (but not cars) would be allowed to pass through and green alleyways that led to parks.

After the screenings, Max Hepp-Buchanan of SportsBackers and Bike Walk RVA did a quick Q&A with our attendees about current local efforts to increase safety for cyclists and pedestrians. He fielded suggestions from the audience about things we could do locally in Richmond to make it easier and safer for people to use transportation options other than cars in Richmond, and it was amazing how insightful some of the comments were.

My personal favorite idea was posting signs on major streets that display “days since cyclist/pedestrian casualty” to encourage drivers to be more aware of non-drivers, a la the quintessential factory safety signs “x days without a crash”. It got a laugh, but it would totally work.

We’d like to give a special thanks to our sponsor, GRS Global, and our facilitators. If you’d like to get involved with organizations working to improve RVA, here’s a list of the folks who helped us facilitate: