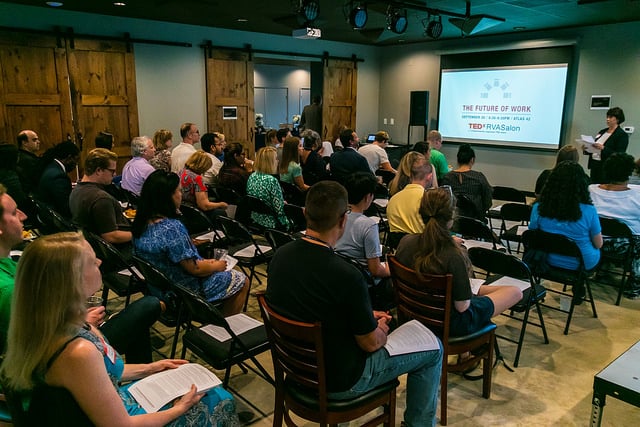 On Wednesday, September 20th we held our Salon sponsored by Capital One covering The Future of Work at Innsbrook’s brand new gem of a venue, Atlas 42. Tucked away, I never expected the multi-purpose space to be as huge and charming as it was. Take a look at our Flickr album of the night to get a better look at the unique space! With a delicious array of snacks and refreshments provided by the venue bar in hand, we made our way over to the listening room that in seconds transformed from an extension of the space to our own private screening room!

We kicked off our discussions on the changing dynamics of today’s workforce and workplace with an introduction from Capital One of their most recent study of how digital technology skills, or “middle-skills”, have developed and how critical they have become for the future workforce in any field.

Before diving into the talks, using some new digital technology of our own, we polled the audience via their mobile phones to get a sense of where they stood on today’s rapidly changing workforce. Pleasantly surprised, we found that the majority were “Somewhat optimistic” about the job market in upcoming years! However, we also saw that most people were skeptical of the growth of manufacturing, truck driving, and retail. Want a deeper look into the night’s polls? Click HERE!

With that background warming us up to the subject, we broke into groups to discuss two TED Talks:

Because of the rapid growth of technology that McAfee covered, some wondered if or when the technology skill set of today’s 39-year-old would become obsolete and what they should do if it does. Should blue collar folks be worried about job security? Some also argued that although today’s students are becoming increasingly more college-educated, the education they’re receiving is quickly becoming antiquated and that there’s a lack of a push to stay updated. Discussions spread further than the idea of robots taking our jobs. They became about survival in more ways than one.

Of the two talks, Fried’s definitely brought about the most imagination in attendees. His suggestion that traditional office spaces and staff meetings are actually the reason people tend not to be productive raised its fair share of eyebrows in the audience. While most people agreed that modern offices don’t exactly cater to where and how people get work done most efficiently, no one could really agree on what the most efficient solution would be.  Every person works differently and thus there is no one solution for optimal productivity.  Most people agreed that employees should be given more freedom to choose how/where they work, but when the idea of no meetings and less oversight arose, suggestions and questions became this wormhole of “how much freedom is too much freedom?”

Another eye-opening suggestion in the talk was that “distractions” such as social media in the workplace are just modern-day smoke breaks. Which brought the discussion amongst our attendees of why the amount of “distractions” even matter, as long as work is completed by deadlines. How much should a manager even be involved as long as tasks are completed?

As unlikely as it would be, one of my personal favorites of Fried’s propositions was the idea of “Silent Thursdays”, similar to “Casual Fridays”. An interruption and small-talk free 8 hours? I’m here for it.

Following the reluctant close of our discussions, we made our way back to the rest of the space to share more ideas one-on-one and meet more of our fellow Richmonders! It was great to see people walk away from our discussions with excitement and new ideas.

Thank you again, to our sponsor, Capital One and to our facilitators for making our Salon possible! If you’d like to connect with any of the organizations or businesses represented at our event click below!

Stay tuned for information on our October Salon! Details out soon…