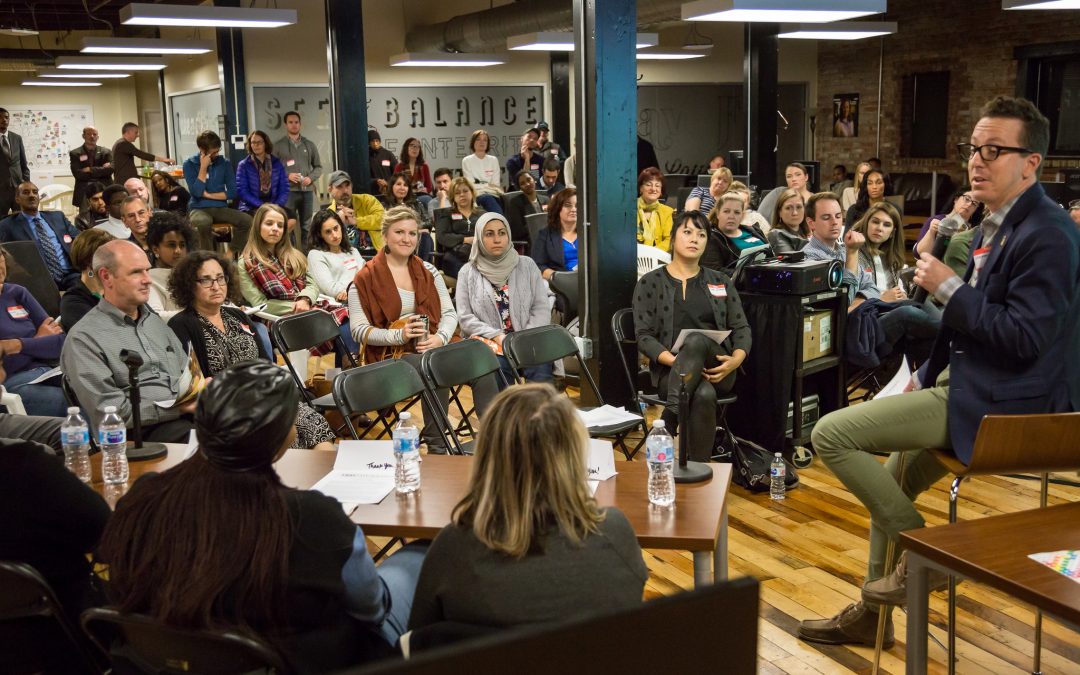 Though I’ve only been with the team since March, this past salon was probably one of my favorites. On October 26th, we gathered at Impact Makers in Scott’s Addition to explore the stories of local refugees under the theme Resettling in RVA.  We switched things up this month by showing only one TED talk but also had the privilege of hosting a panel discussion with three refugees who led our event through their relationship with the International Rescue Committee.  We are so thankful for those individuals who were willing to share their stories and hopes for the future.

The TED talk we screened to kick off the evening was Luma Mufleh: Don’t Feel Sorry For Refugees– Believe In Them.

Mufleh tells her story of being an immigrant, Muslim, daughter of a refugee, and soccer coach to refugee children. She also shares a few stories about the children enrolled in the all-refugee school that she founded. What seemed to shock most attendees at our event were the sheer numbers that she mentioned in her talk. 65.3 million people have been forcibly displaced due to war persecution. Over 33,000 people flee their homes in Syria daily and we now face the highest number of refugees since World War II. Of the population of 65.3 million, only 0.1% are approved to resettle in the United States and over the last few years, we have seen a global anti-refugee sentiment spreading.  One of the takeaways that resonated most with our audience (myself included) was that the problem should not be finding ways to stop refugees from entering our countries, we should not be forcing them to leave their own.

With this wealth of information in mind, we broke into groups and the most asked question was simply “What can we do?” Many wanted to help but weren’t sure what resources really make a difference and were frustrated that they aren’t given a full picture for these communities. Not having all the information about what exactly is happening to and for these communities made it difficult for the audience to know where to focus their efforts.

Some were angry at politicians as they thought that they were the reason for this lack of information and were largely responsible for marginalizing refugees and only allowing them in their countries if they served some benefit to them. After hearing Mufleh talk about the value of education for these communities, many were frustrated that there isn’t a better system for transitioning refugee children into schools. Overall, why is our society not valuing refugees as human lives? Why are they treated as less-than for seeking a safer life?

With these pressing concerns in mind, we moved to my favorite part of the night, which was speaking with our panelists on their experiences resettling in Richmond. They told their unique stories of struggle and fear for their lives, but also how they’ve prospered through the help of organizations such as the International Rescue Committee.

Just as in our discussion groups, one question was prominent: What can we do? To my surprise, they all asked for one thing– kindness. In their experience, the kindness that they experienced from strangers made all the difference being so far away from home. They encouraged us to show compassion to every person we encounter because like them, every person has a journey and you just never know when you’ll interact with someone with as tumultuous of a life as theirs. The kindness and generosity they experienced being here were more than they expected and they now have no problem calling Richmond home. It even encouraged one of the panelists to help others like her by paying it forward and working with the IRC and refugees coming from her country.

Thank you again to everyone who came out last week and joined us for a salon topic that we’ve been eager to address for some time! A huge thank you to everyone from within the community that offered their support to help make this event happen:

**Please remember to VOTE ON TUESDAY, NOVEMBER 7, 2017. The upcoming elections for Governor and House of Delegates will have big implications for refugee resettlement. Last year, there were 3 anti-refugee bills in the Virginia House of Delegates. One made it through and was vetoed by Governor McAuliffe. Please go vote and help us make Virginia a state where refugees are welcome! Not sure where to vote? Here is a link to find out. Not sure what to bring with you? Here’s a link for that too.**

Remember that while we are not holding a Salon in November, [email protected] is being held on November 18th and is a FREE event! Click here for more information and to register to attend! More information on our December Salon will be released soon.